Here is the GOOGLE MAP for this weekend!

It’s a good weekend for music lovers of various sorts. On Saturday and Sunday it’s the annual free classical music concerts on Sint-Jansplein: Klassiek In De Stad which features opera and dance  (from the Flemish opera and ballet companies) as well as orchestral pieces performed live on the stage by the Antwerp Symphony Orchestra

Friday evening’s Critical Mass is a special edition for kids, brought to you in conjunction with the Fietsers Bond and with corresponding events in Antwerpen, Gent, Brussels, Aalst, Hasselt, Tienen and Ternat. Assemble at Theaterplein at 6pm with your kids, bikes, tagalongs, kids’ bikes and bike seats, to help make a point about the importance of safe cycling for children and young people in Antwerp.

Urban Meets Baroque takes place on de Coninckplein (in front of Permeke Library) as part of the ongoing Baroque Season in Antwerp. Urban Meets Baroque kicks off a weekend of related events which form the Festival Royal taking place over Saturday and Sunday as well. 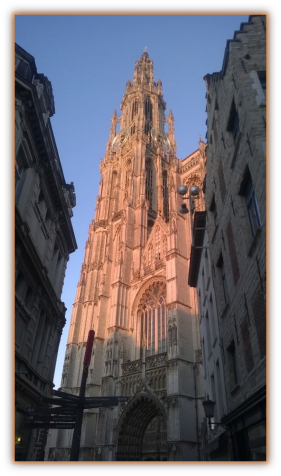 The Paulusfeest is a new music, street theatre and arts festival on two locations: Sint-Paulusplaats and at Het Stadsmagazijn. It starts at 10 am and the last musical performance begins on the square at 9.15pm

500 years  ago the towers of Antwerp’s famous cathedral were completed. This is being celebrated by the city at an event called Onze Toren 500 which starts at 4pm and finishes at 10pm, with the promise of free cake on Grote Markt at 5pm.

Swan Market  from midday on Grote Markt from 11am -5pm

and Markt van Morgen on the Kloosterstraat from midday. Both markets offer products made by small local businesses and creatives. You can find jewellery, stationery, household goods and accessories for sale. Swan Market is the larger of the two markets.

Local artists open their ateliers and work spaces all over Antwerp today between 2pm and 7pm as part of Open Studios.

It’s the last chance to enjoy the Zomerbar as the ZVA programme comes to a close.

It’s the first Sunday of the month which means Sunday shopping in Antwerp centre and other shopping areas of the city (e.g. Nationalestraat, Kloosterstraat)

The weather is likely to be warm and dry (although cloudy at times) with temperatures of around 20- 22 degrees.

Belgian schools go back on Monday, so roads will be busier at school times.

On Tuesday, look out for a special blog post from a reader in Scotland who was part of the street music scene in Antwerp from 1998 -2012 and has written a fascinating account of his time here …Dave is a man with great Antwerp stories to tell, so much so I am hoping that there will be a sequel to Tuesday’s guest post.

Facebook (Events in Antwerp: in conjunction with London Calling)